Are You Edgy Enough?!

What does it take to lead a $6.2 billion dollar health organization with 3,000 physicians, 40,000 caregivers and rank in the top 3 among healthcare systems in the U.S.? You might be surprised to learn that the answer is the opposite of what we’ve been told great leaders do.

Founded in 1921, and now with more than 5.1 million patient visits per year, the Cleveland Clinic is considered a premier institution for advancing healthcare, pioneering research and modeling what it means to serve communities both local and global.

Recently, we had the privilege of hearing their Executive Learning Officer, Dr. Jim Dunn (he has three doctorate degrees as a fun fyi), share Cleveland Clinic’s leadership development practices and during his talk he posed a provocative and intriguing question:

Do you live on the edge of your knowledge or in the center of it?

Most people answer, “I live in the center of it.”  And these responses make perfect sense on the surface.  Malcolm Gladwell promotes 10,000 hours, Marcus Buckingham wants you to know your strengths, and Stephen Covey wants you to develop some terrific habits. What these leadership theories and models share is a foundation of centeredness. Know who you are, get grounded, and operate from there.

However, Dr. Dunn shared that pioneering leaders like Cleveland Clinic’s CEO, Dr. Cosgrove, go to the edge to lead.  Dr. Cosgrove got his 10,000 hours plus.  (He performed more than 22,000 operations.) He knows his many strengths and developed many good habits. (The years since Dr. Cosgrove’s appointment as CEO in 2004 have been the most successful in Cleveland Clinic’s history.) But Dr. Cosgrove doesn’t operate command and control from the center of his knowledge and experience. Instead, he leads from the edge of it. He’s curious, is driven to learn and know more, gains energy by this quest for creativity and innovation (he filed 30 patents for medical and clinical products used in surgical environments), and encourages others to be challenged by ambiguity instead of living in fear of it.

Leading from the edge, embracing the unknown, building unlikely relationships and being excited by these explorations into unfamiliar, sometimes even chaotic territories leads to surprising and very successful outcomes.  In 2008, Cleveland Clinic became the first healthcare provider to sign the United Nations Global Compact, focusing on human rights, labor standards and environmental stewardship. In 2011, they donated over $550M to community endeavors, in 2012 they were named an ENERGY partner of the year by the U.S. Environmental Protection Agency and they continue to be ranked number one for their heart surgery program since 1995. And if that’s not enough, they’re even on the edge of their name, with Cleveland Clinic offices now under construction in Abu Dhabi.

In the September/October issue of MIT Technology Review, they honored 35 innovators under the age of 35 as well as 7 over the age of 70. From programming languages to micro-fluid chips to neural networks to robotics, what they all share is an unquenchable thirst for what they will learn tomorrow.

To lead from the edge requires courage, a passion for seeking out the mysterious, a willingness to lean forward and faith in letting go of what you do know in order to reach for the unknown.

5 Questions to Move You Closer to the Edge

Overcoming a negative attitude: What to do when caught complaining 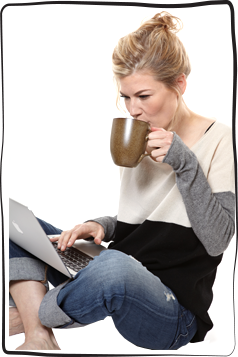